There are 11 kinds of reports in FLS:

1. Play by Play report shows actions made at specific time. Substitutions/Fouls/Turnovers/Time Outs can be deselected if not needed. Missed/Made Field Goals and Free Throws results can be left out. 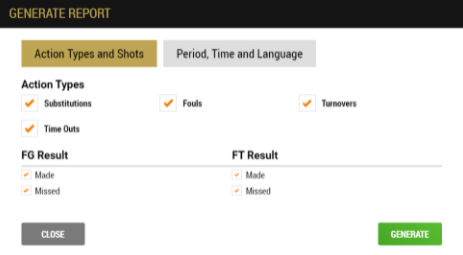 Period/Time/Language can also be selected in the other tab. 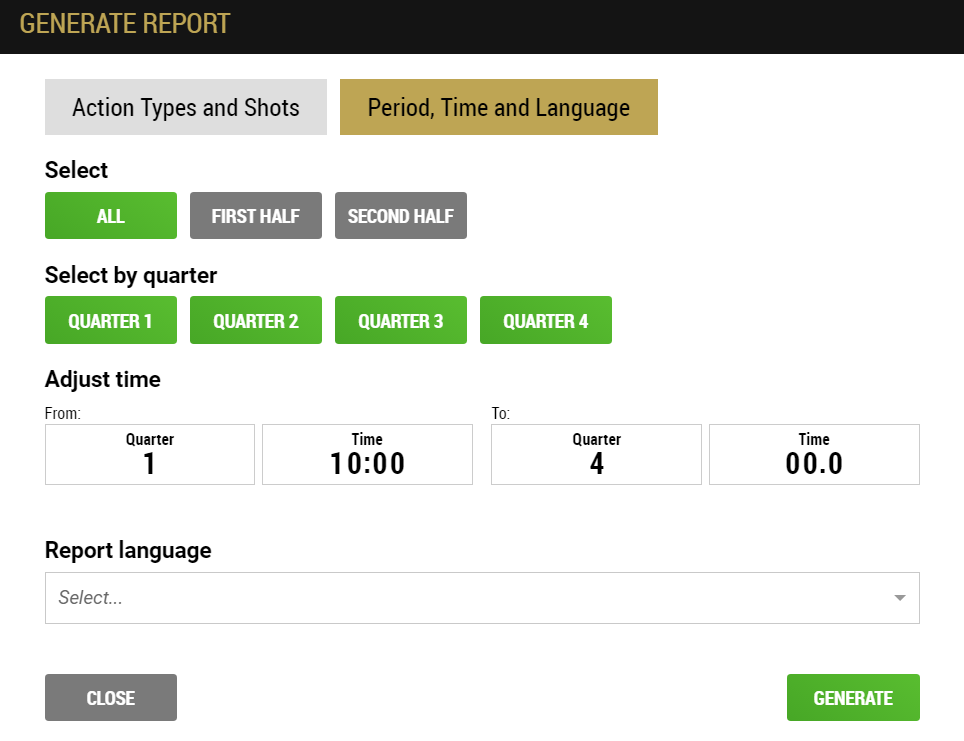 One quarter Play by Play details are usually shown per few (3-4) pages. It also includes scoring by 5 minutes interval and final result of a match. 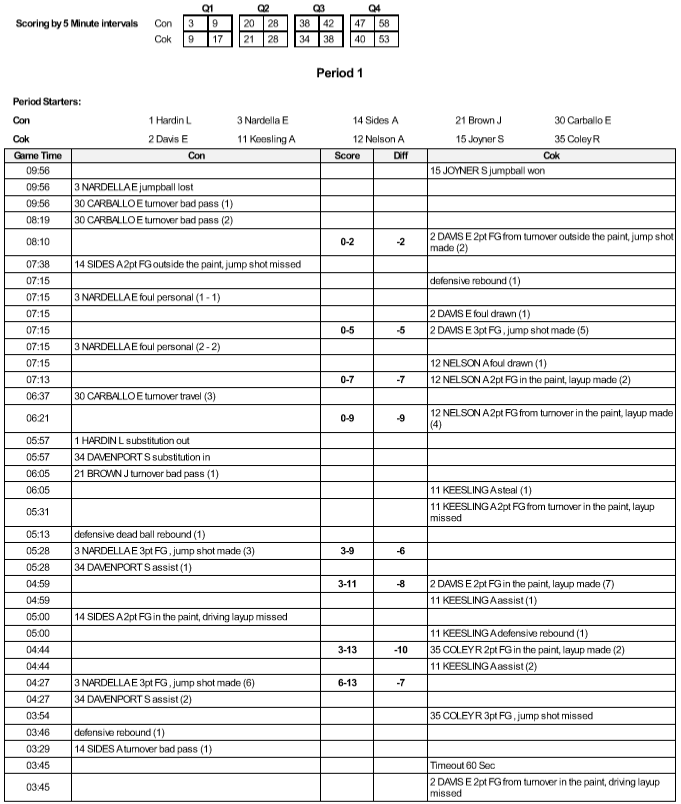 2. Quarter by Quarter Scoring report is a one page report which represents scoring by quarters. Both teams' scoring is visible in one page.

This report can be modified by selecting specific quarter or all at the same time. 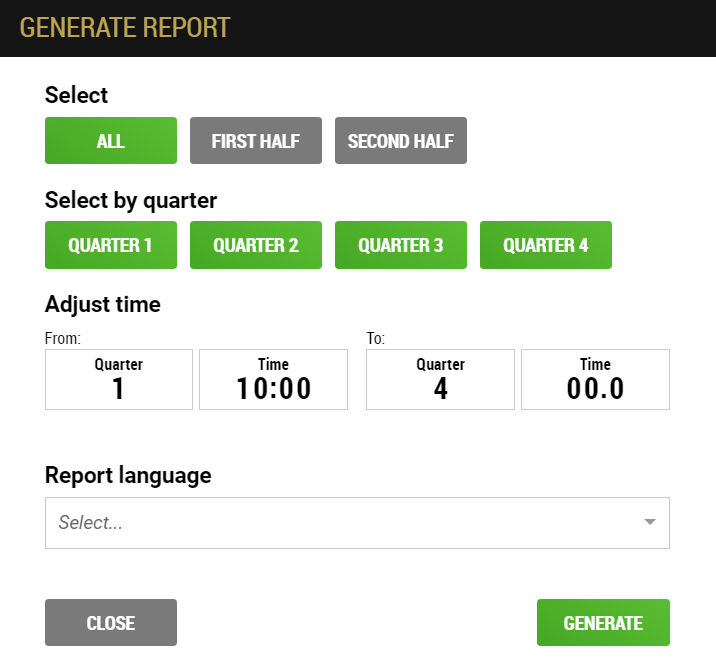 3. Play by Play Scoring report displays a quarter per page. It shows both teams at the same time with scoring information (game action and who has made it) at exact timestamp. Also Team A (home team) score difference is shown.

The legend at the bottom explains abbreviations used in the report.

5. Line Up Analysis report has two pages - one per each team. It shows all team Lineups during the game and Time played, Score, Score Difference, Points/Minutes, Rebounds, Steals, Turnovers and Assists for each separate lineup.

6. Rotation Analysis report is more detailed than Line Up Analysis report as it includes Quarter and Time at which lineup showed up on court and left it, Time on Court, Score, Score Difference, Rebounds, Steals, Turnovers and Assists. 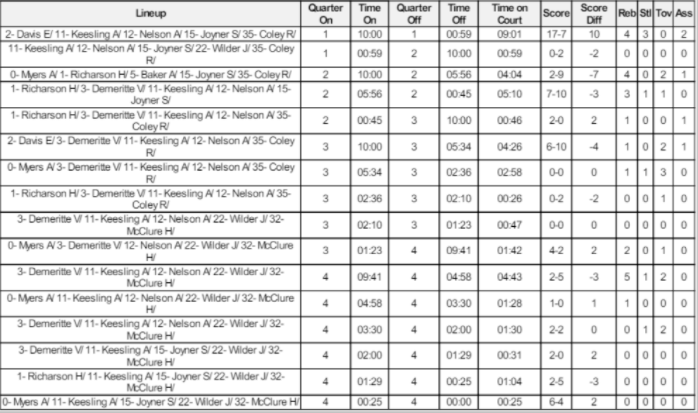 7. Player Plus Minus report is a one page report. It shows Minutes, Score, Points Difference, Points per Minute, Assists, Rebounds, Steals and Turnovers with a player on and off the court.

8. Shot Chart is a one page report, which shows Made/Missed shots during the game/quarter. 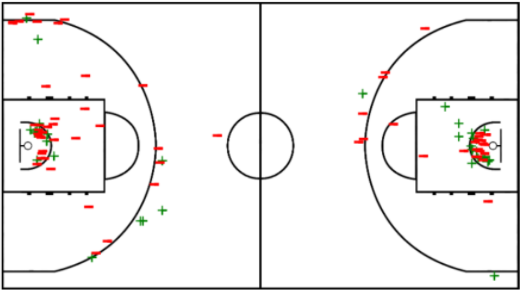 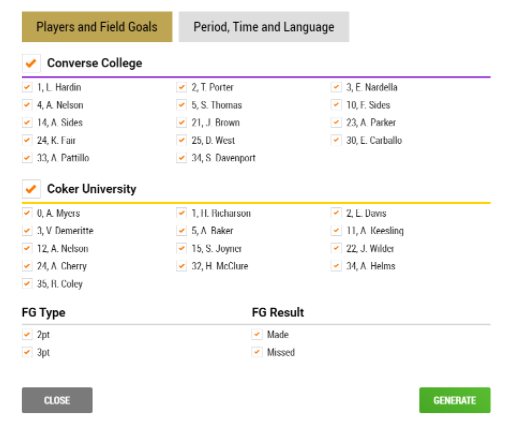 It displays selected Field Goals and Free Throws types and results (made/attempted and the percentage).

If Made Field Goals is selected, box will display total shots, that have been made.

If Missed Field Goals is selected, box will display total shots, that have been missed.

9. Shot Areas report is a one page report. It allows to filter one or both teams, specific players, FG types (2pt, 3pt), FG results (made/missed) and displays made/attempted shots and percentage of specific area. 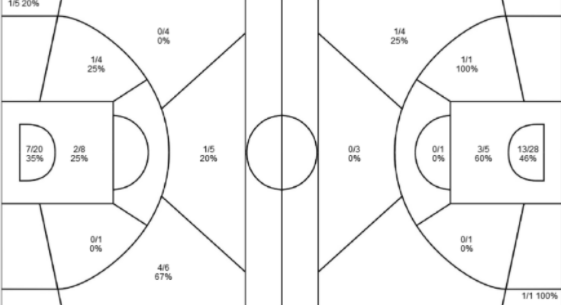 It also provides selected FG and FT types and results (made/attempted and percentage) of shots in a separate table.

10. Score Sheet is generated from the data entered during the pre-game setup and is not filled during the game. 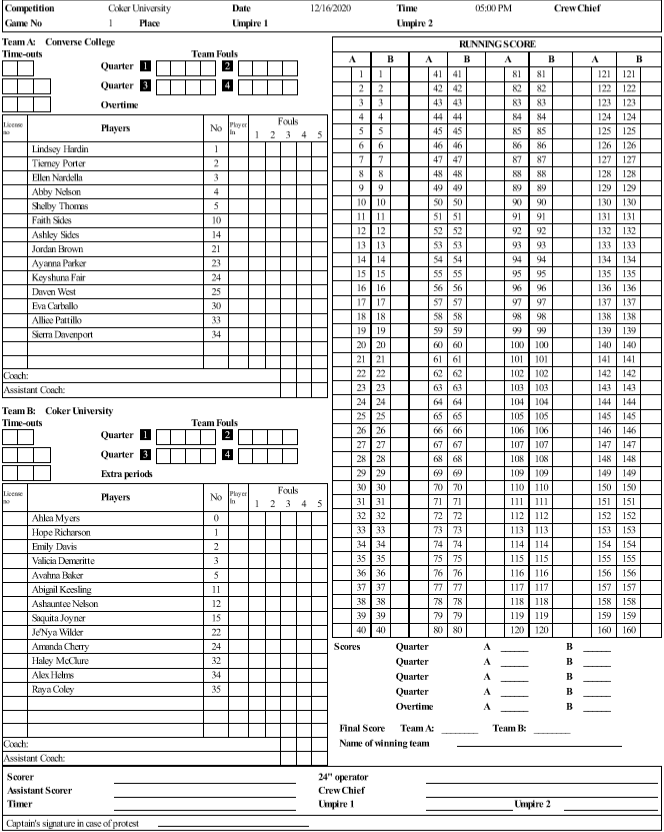 11. Player Evaluation is a multiple pages report which shows information about players and their performance.

This report also includes a Shot Chart and game actions at specific time.